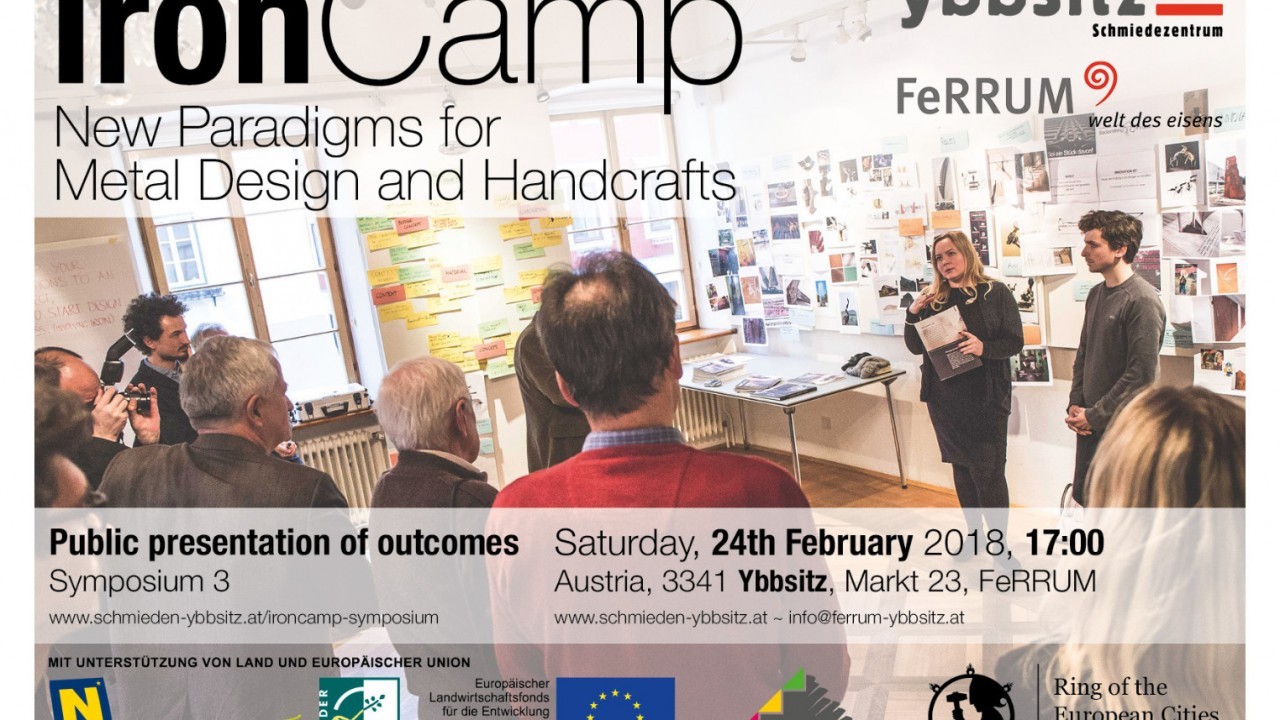 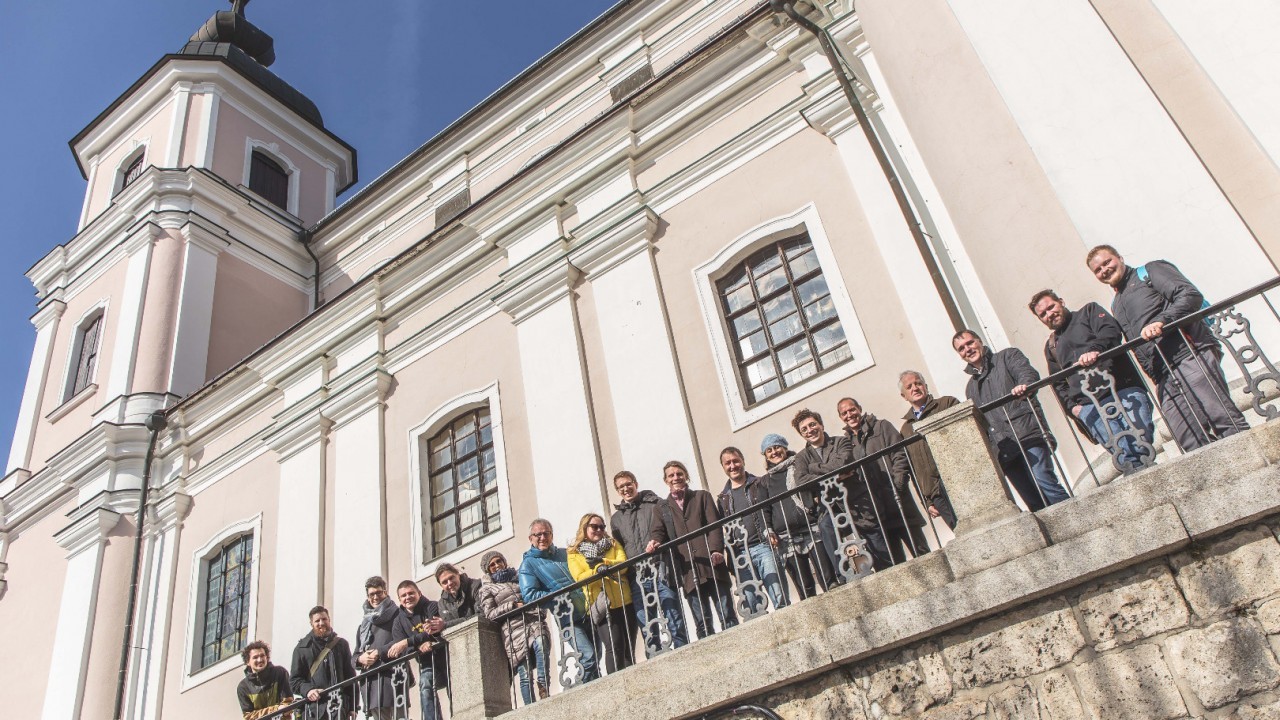 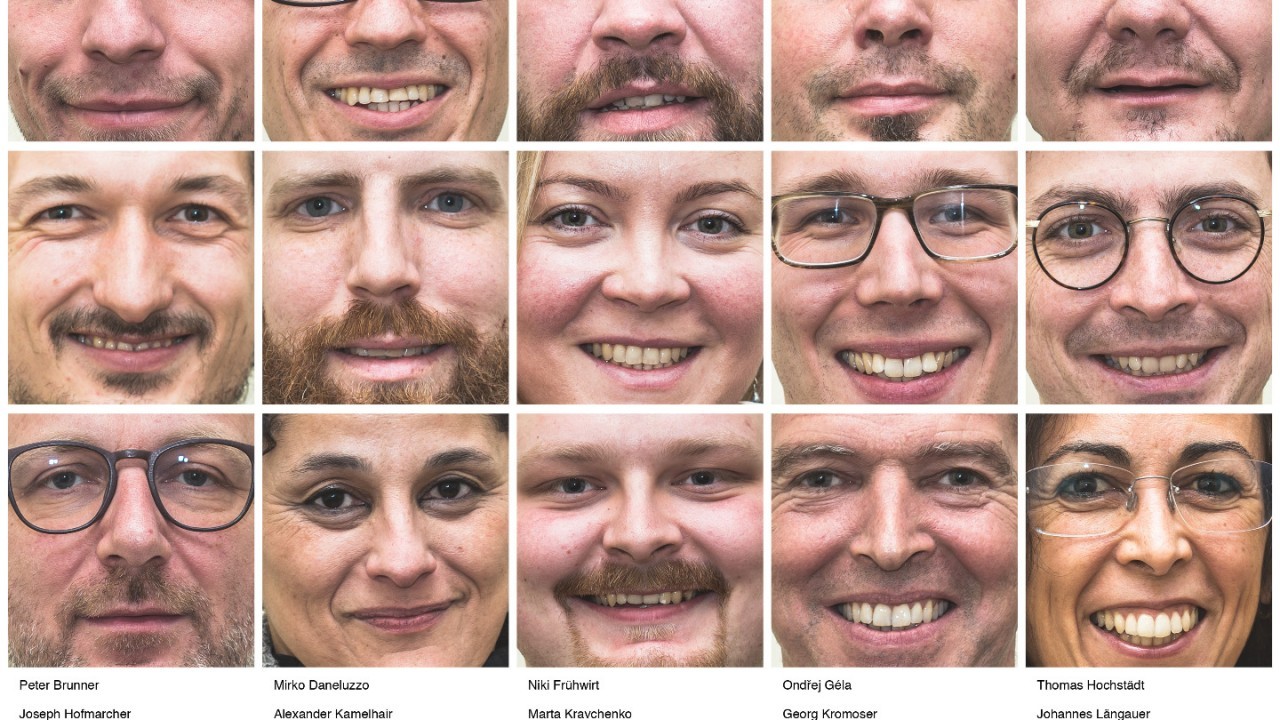 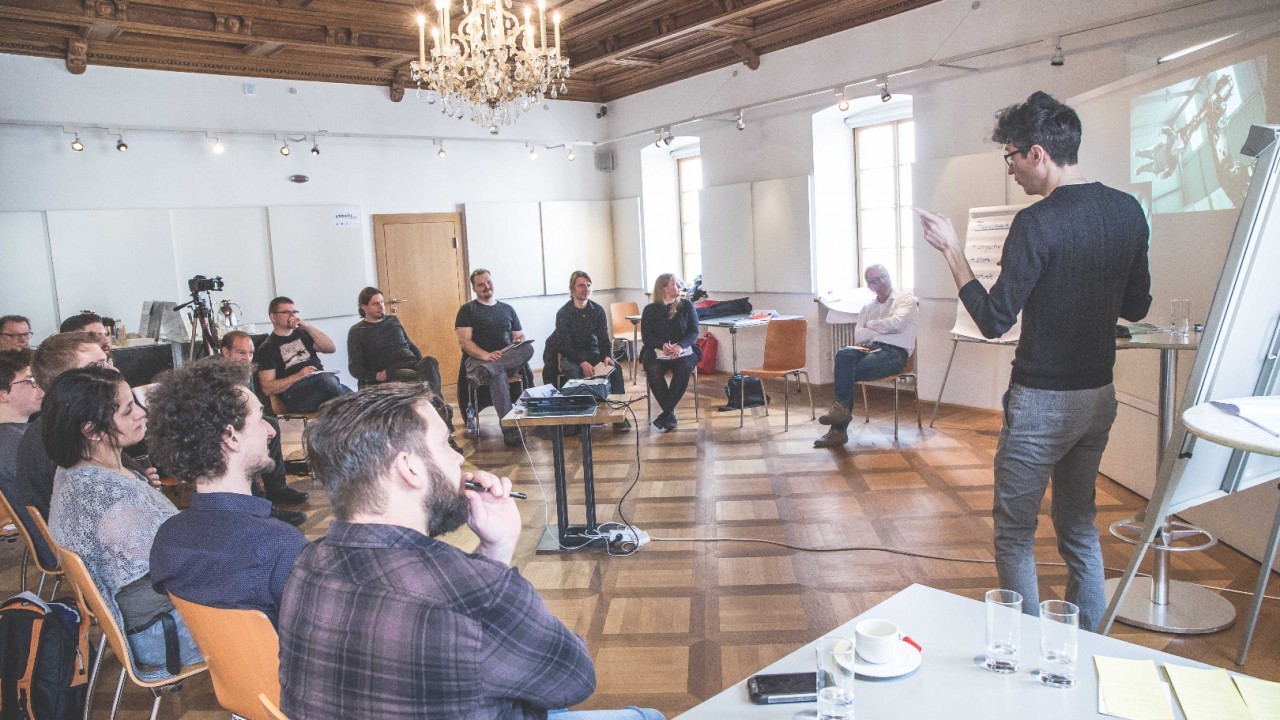 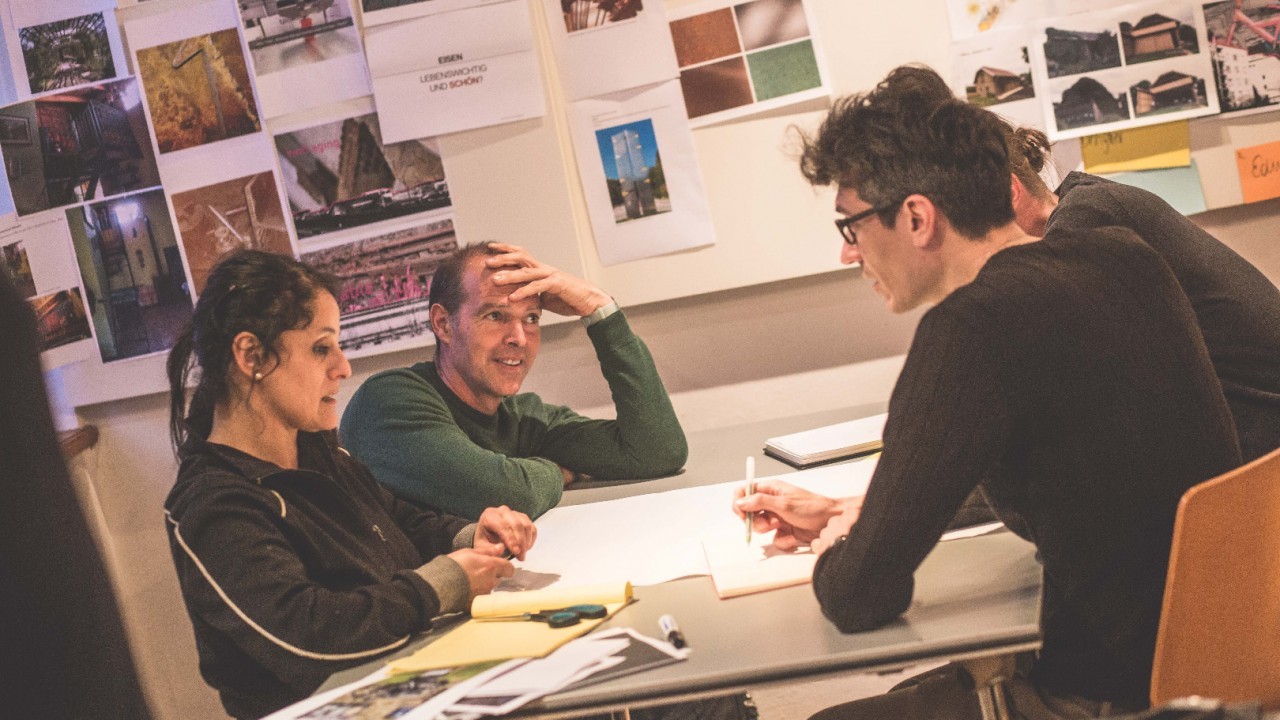 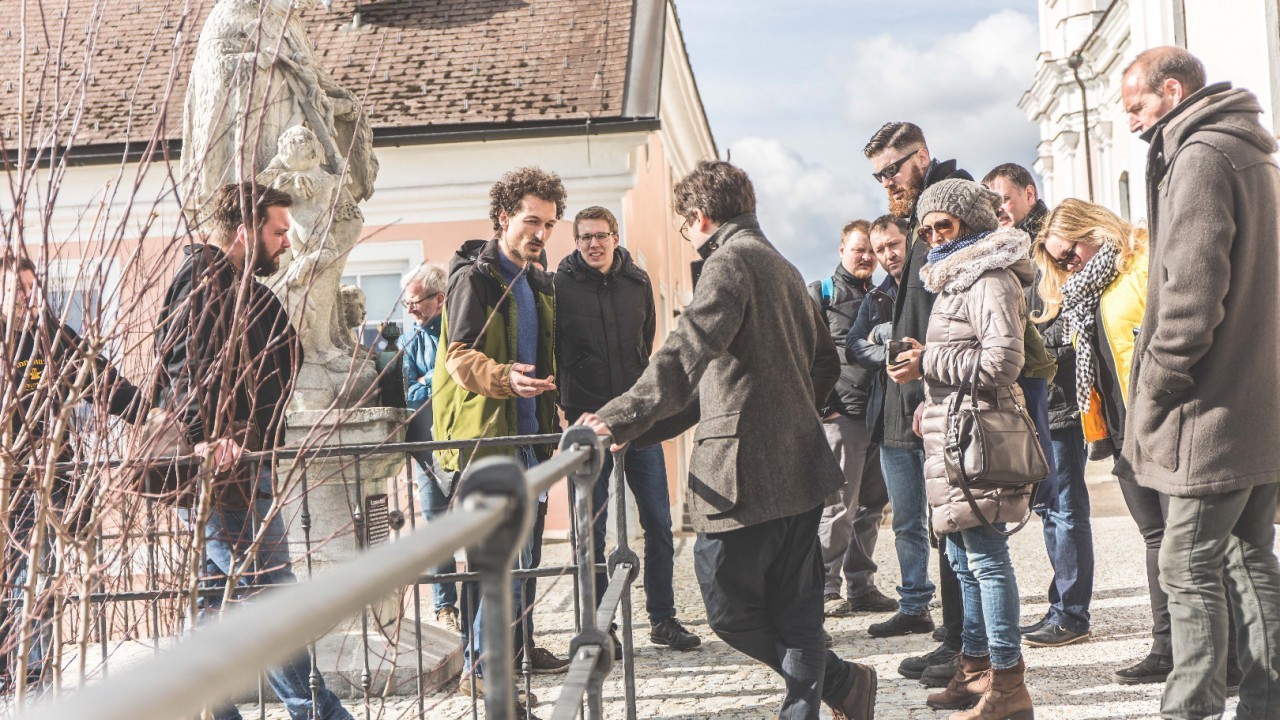 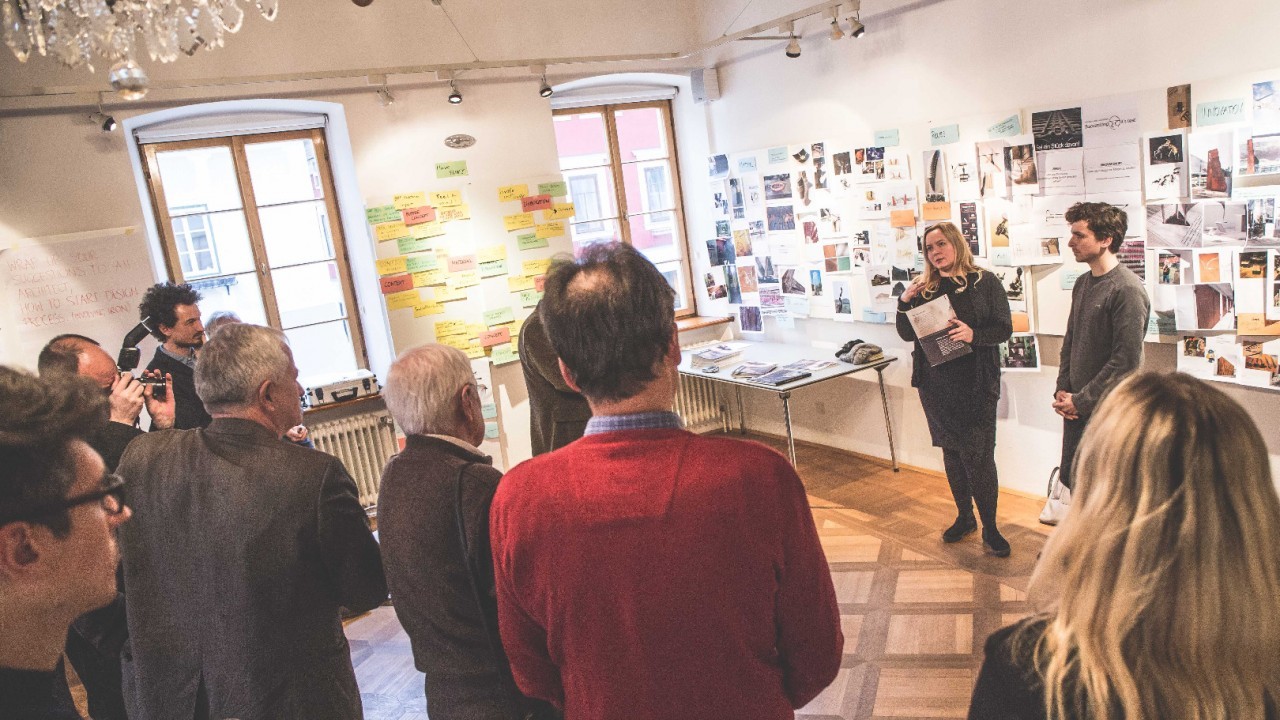 Introduction:
The series of symposia „IronCamp“ in Ybbsitz is engaged with the future of metal design and blacksmith
handcraft. In its second edition in February 2017 the international and transdisciplinary group treated
questions like „What will a blacksmith do in the year 2030?“ and „Why metal and forging?“. The stimulating
lecture by the progressive Italian designer Mirko Daneluzzo (NYXO studio) lead the path towards novel
technologic-mechanical support of the crafts. And he even coins the provocative term of „cyborg-craft“. The
question of roles, and the question of communication between the crafts remain essential.

Structure of the project:
The symposium IronCamp is programmed to a series of three parts. IronCamp 1 took place in February
2016, IronCamp 2 was held in February 2017, and the final and third edition shall take place in February
2018. The association „Schmiedezentrum Ybbsitz“ is project promoter and is supported by subsidies of
the European Union and the Country Lower Austria (LEADER, LE14-20). Further supporting institutions are
the Ring of the European Cities of Iron Works, the Eisenstraße Niederösterreich and the UNESCO.
It is key to the project promoters that metal design and handcraft is addressed qualitatively on multiple
levels. And by these means, to rise the appreciation of blacksmith craft and demonstrate its future
opportunities. Through the UNESCO-title for the intangible cultural heritage „forging in Ybbsitz“ the
assignment persists, to carry the lively forging craft into the future.
Each symposium is concentrated to three days of moderated thinking and discussion. During an excursion
the experts are brought closer to the local context, to also set impetus for discussions. A stimulating lecture
provides substrate for the thinking process. The group of thinkers is composed of 10 to 12 international
experts from blacksmithing, sculpting, architecture, design, material sciences and art history. Hence there
are paradigms for metal design and handcrafts discussed, filtered and rendered visible. The outcomes of the
IronCamp symposium can never provide absolute statements. The paradigms can only be filtered from the
perspectives of the persons actively involved in the matter. After each of the three symposia follows a
publication of the contents. Those contents are provided online (see weblink below). By this, they are
available to all interested persons.

Core statements of IronCamp 2:
Two major paths for the future of metal design and handcrafts were filtered within IronCamp 2. In one
direction the blacksmith can see himself or herself in a niche market. And he or she can feed a common
humane desire to materiality within our age of digitalism. Many other exhibitions, symposia and publications
today and worldwide are investigating in the appreciation for the pretendedly vanishing crafts. In this matter
the term „innovation“ takes a subordinate role. Because in this direction the metal designer remains merely
concerned with traditional techniques of elaboration, and he or she remains content in celebrating the
archaic image of blacksmith craft. Hence, this path is a traditionalistic attitude and at the same time the
consciousness to the ancient fascination for fire and iron. At that point the blacksmith remains a conservator
or even a representational object for the experience of a so to speak ancient technology.
In a second current it is about the factual advancement of the metal designing craft. With the application of
technological improvements and novel tools for design, production, and communication every metal designer
can thrive back „to the top of technology“(2), and remain true to the original tradition of development within
blacksmithing. Tools were always an extension or an amplification of the human hand. In blacksmithing craft
this is illustrated by tong and hammer. Within blacksmith craft in early times supporting tools where invented,
that where no more guided merely by hand. Consider the tilt hammer or the pneumatic hammer.

Designer Daneluzzo illustrates the leap into the future with a so called exoskeleton and through
manipulators, which are used in common industries since decades now. Industrial manipulators are
controlled like excavating machines and other vehicles through steering modules (levers, steering wheel, …).
Exoskeletons are thematized in science-fiction, and they are used already for military application. Their
principle is to directly amplify or mirror the capabilities of the human body at various scales. The tool
becomes a direct technologic or mechanical extension of human limbs. These new means suggest the term
„cyborg“ as a hybrid between man and machine.

„Why metal? Why forging?“
The IronCamp-symposium deals less with the „how to“ in metal design, but it raises questions of motivation.
At answering the „why“-questions, we find that metal designers are being motivated by a strong emotionality
for the archaic material. Metal itself still fascinates and convinces in our actual zeitgeist of plastics. It shall
have a soul because of its particular qualities in elaboration, for its aging process, and for its manifold
possibilities in application.

„What will a blacksmith do in the year 2030?“
Within this question the group of thinkers comes to the point, that the handcraft itself will not change
seriously within the next thirteen years. The blacksmith will more and more consider global marketing for his
or her products, and gain knowledge through the ubiquitous media of communication. This already happens
via online learning videos, or through online forums, as for example „www.schmiededaseisen.de“ hosted by
the german masterblacksmith Peter Brunner. On a local scale the workshop itself as a physical medium
remains valid for the creative production. There will be a higher appreciation for the niche of „forged
products“. Today a majority of people in the western world has no relationship to material qualities in their
professional lives. Hence, the desire for the experience of handcraft and the acquisition of handcrafted
products will still rise. And if there will be exoskeletons commonly available already by the year 2030, then
there will be a hammer swayed within. And the motions of a blacksmith well be sensitively and directly
translated in a different scale of power.

Ressources:
https://issuu.com/schmiedezentrumybbsitz/docs/ironcamp-2016-web-issuu
http://schmieden-ybbsitz.at
Footnotes:
(1) Architect Franz Sam had met the reasonable statement in IronCamp 1, that the blacksmith was on top of
technology a thousand years ago.
Photographs: Andreas Kronsteiner
Text: (CC) Joseph Hofmarcher